I always walk home from school and never before have I got lost until the last Tuesday. As I was running along the golden, astonishing cornfield, my heart leapt as I heard a deafening scream. I stopped still, paralysed as the noise once again made the hairs on my neck stand up. I decided to go and investigate. As I crept down the pathway, I heard the cry again but this time, as well as scream, I heard laughing. I ran as fast as I could, my heart thumping against my aching chest until I reach an abandoned cottage with the door swinging open. Regretting my choice already, I stumbled to the broken door and went inside but should I have?

The cottage did look nice on the outside but inside the cottage it was loathsome.  Cobwebs and decayed wood covered the house making me want to be sick.  Every breath I took, a foul smell of rubbish filled my nose.  One thing that did catch my attention was a book that seemed to have my name on it. On the front cover of this book (that looked like it had not been opened for a thousand years) was a picure of a spooky, scary zombie. Another thing that I saw on the corner of my eye was a warning saying, "Do not open this book. It is cursed. Whoever opens it will get bad luck for the rest of their life. As soon as I opened it, I wanted to warn other people about what the Monster Book can do. This book is as dangerous as jumping off a tall cliff. Please do not ignore this message."

I decided (after about half an hour) that it is probably one of those silly warnings you get on an adults' book saying 'warning: seriously scary'. This was a bad idea. As soon as I opened it and began to read, strange noises began to ring in my ears. A few minutes later, a cold hand touched my shoulder. Screaming, I turned around and came face to face with a ghost. This obnoxious creature laughed at me, making me jump out of my skin.

I ran out of the room thinking, was the book possibly right? I slammed the door shut in the dismal bedroom and began to weep. Didn't it say that you'd get bad luck for the rest of your life? The more I thought, the more scared I got until I was disturbed by a deep growl.

I whipped my head around to see a terrible, emerald-green zombie staring into my deep blue eyes as it approached me viciously. I screamed, again, and stumbled out of the door. Panting, I tried to run and hide in every room but every time I bumped into a monster such as a mummy in the bathroom, a skeleton in the kitchen or a werewolf in the closet and much more.

"I definitely need to get out of here," I told myself, so I ran downstairs to the door and turned the handle but I couldn't open the door. I was stuck, maybe forever. It was then that I called for help which I thought would be useful.

"Help me!" I pleaded. "I'm stuck in an abandoned cottage with monsters in it." There was no reply. I needed to find the book. I ran and ran thinking, I can do it, I shall do it. Finally, I reached the contaminated room and monsters flooded in and an array of sounds gave me a headache. I reached for the handle once more and turned it again. Still, nothing. I would have to keep running from the monsters for the rest of my life. The faster I ran, the more tired I got. I already had lots of bruises and cuts and my temperature rose rapidly with every step I took. Someone would find me, someday.

Wondering why I came, I lay down hidden from the monsters for now, until someone had the courage to open the door of the cottage and let me out. Until that day, I will keep running from the monsters, missing my home and never knowing what time it is or which day it is. Will you let me out of this disgusting, horrible place?

So, never open a book with a warning. I have learned my lesson from the monster book. I only wanted to warn you about it and make sure that nobody opens it and that they don't get cursed.
Posted by Jo Payne at 11:32 am No comments:

Battle of Marathon by Daisy, 6CP

Nauseating piles of rotting corpses filled the battle field. The never-ending screams of the injured were continuously thrashing at my eardrums as we raised our blood stained swords in victory and relief. Fame was ours; Greece was ours. We couldn’t believe we were able to achieve this.

While we all stood nervously at the top of the hill, we took a deep breath in and watched the early morning sun slowly rise into the sky. My eyes quickly darted to the Persian army of 30,000, which was when I started to feel really nervous. We only had 11,000 men. I stared at my friend for a moment; he look confident and naive but I felt really nervous.

While we were still at the top of the hill, we got into our new phalanx formation. As I was getting into place, I started to doubt this new decision. Then we finally started to march down the steep hill over to the Persians awaiting us on the sandy battle field. We all came face to face,enemy to enemy. Battle had begun....

Battle cries were heard all across the bay as soldiers transformed their fear into anger. Showers of blood rained down on us as we slowly outnumbered the Persians. Countless bodies lay on the sand but there were more Persians yet. Many Persians came towards us feeling really confident the eventually lost their lives to our swords and spears. But they wouldn’t give up.

Revolting piles of Persian corpses were scattered all over the battlefield. The piercing screams of the injured or dying was all I could hear. The salty wind was bitter, but victory was sweet. Then I saw loads of soldiers dropping their armour in relief. Some even collapsed with their armour because they were so tired because they have been fighting in metal armour for a few hours which wasn’t easy.
Posted by Jo Payne at 8:00 pm No comments:

Battle of Marathon by Luke, 6CP

Bodies with snapped necks and missing limbs, lay in puddles of their own internal fluids. Rivers of blood linked heaps of blooded corpses like vivid crimson paths. But it was over; the carnage was over. I glanced at the first Persian I killed, spear was still wedged in his blood stained stomach. Pain burned through my shoulder as I stood horrified by the massacre.

A glimpse of rising sunlight shone from the horizon, as the moon hung just above the mountains behind us. Rumours had been passed between the lines, that the spies had seen Datus load his cavalry back onto his boats and sail away. Tension hung in the air, as we anticipated the fierce battle ahead of us.

The morning light shimmered from behind general Miltiades, casting a dark shadow across his face as he yelled his speech to us. We began our march, and at arrow range, we broke into a run. I saw stunned faces as arrows rained down all around us.

I ran at a Persian and plunged my spear deep into his stomach. I was forced to leave my spear wedged where it was by an angry Persian charging at me. I spun whipping my sword from it's sheath, and catching him across the chest. The Persian collapsed, blood dripped down his front. I stopped for a moment to take a breath, but realised, that was a bad idea.

I clutched my shoulder in agony as an arrow whizzed between the gap in my armour. I went down, my head pounding. A puddle of blood leaked from my shoulder. I tasted blood, I must have bitten my lip as I hit the ground. And that was the last I remembered.

I came to myself with a familiar ringing in my ears and a distant pain in my shoulder was slowly growing. With my good arm I hoisted myself into a sitting position. “Aaagggghh!” I screeched as a strong gust of wind blew sand into my cut. I looked around and realised…

Bodies with snapped necks and missing limbs lay in puddles of their own internal fluids.
Posted by Jo Payne at 7:58 pm No comments:

Battle of Marathon by Max, 6CP

Shredded piles of sliced limbs filled the tributaries of blood and sweat, covering the fields that will never be the same again. Success flooded the bay where the Persians; equipped with broken swords, lay moaning and groaning with life threatening injuries. Glory was ours; Liberation was ours. The sacrifices of our soldiers will be remembered after we return to our homes.

A glimpse of rising sunlight shone from the mountains behind us as the fading moon fell into the undulating horizon. Morning sea-mist swept over the Persian troops - blinding them from us and us from them- but as the blazing sunlight rose to the peak of the sky, the sea-mist faded and we regained our line of sight.

“I am a strong soldier who usually fights for Miltiades on the edges of the phalanx.” Miltiades gave the order, “You on the phalanx now!” Confused, I did what he said. “Charge!” The whole army/phalanx sprinted into the action. A wave of arrows came flying down bouncing off of our shields like skimming stone on water.

Morning turned to night, light turned to dark as it seemed in my head as Persians dropped dead, blood spurted out of the dying men laying on the blood-soaked ground. The sound of metal clanging, burrowed into my ears partially deafening me. “Argh!” a sword welded to a Persian, dug into my arm causing me to leak blood out of my molded creating a red water feature.

Glory was ours; Liberation was ours. The sight of organs and body parts flooded my mind horrifying me and no doubt going to do again. I have killed so many people who may have had a loving family just like I do who will be waiting for their return but will have to face the horrible fact of their loved ones passing away.
Posted by Jo Payne at 7:56 pm No comments:

2SV have been writing letters to their families inviting them to their Christmas Production.  Click on an image to make it bigger. 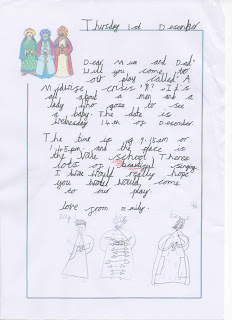 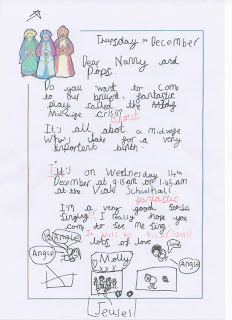 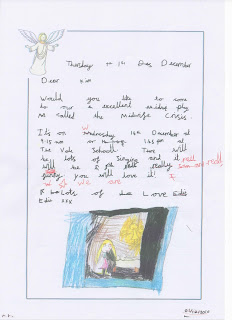 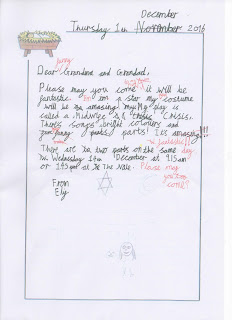 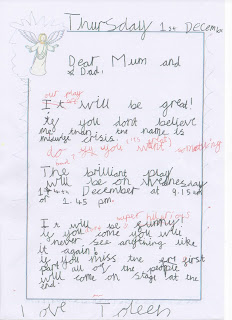 2FO have been writing some letters to invite their families to their Christmas production.  Click on an image to make it bigger. 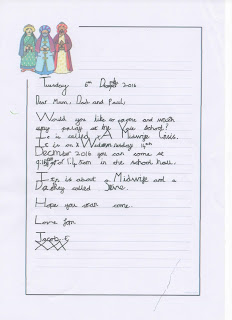 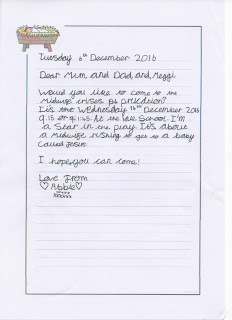 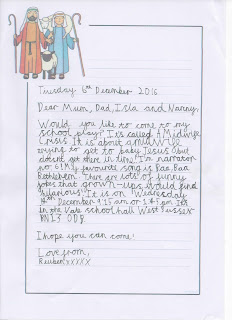 The Frozen Castle by 4JP

4JP have been writing about a frozen land.  Listen to their paired writing by clicking on each audio file.

Letters from the Trenches, 4EN

Year 4 have been writing letters from the soldiers in the WW1 trenches.  To view a large version of the image, click it.

Letters from the Trenches, 4JP

Year 4 have been writing letters from the soldiers in the trenches.  Here are some of their final versions.  Click on an image to view them in a larger format.

Type your email below to receive new posts to your Inbox: